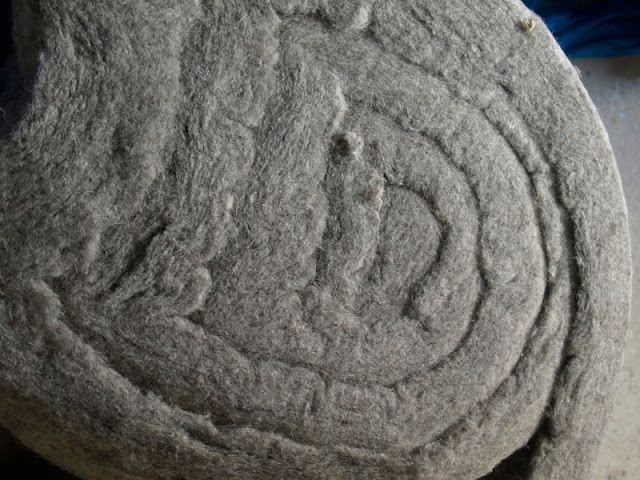 The sheeps wool is back out today to insulate the last few bits.. 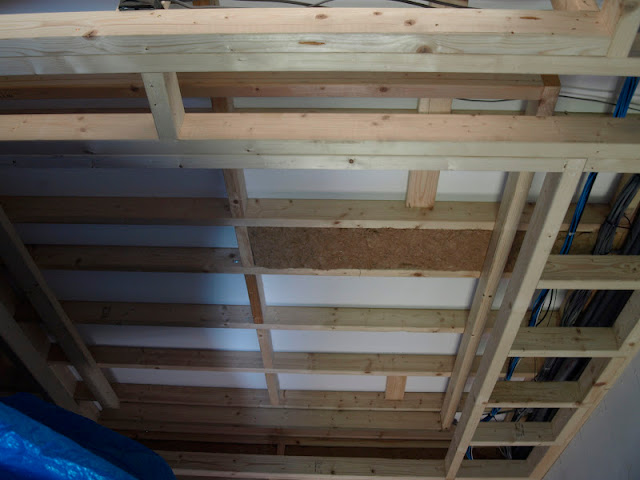 Like this wall between the study and the hall.  This wall was meant to be sprayed with warmcel insulation with the rest of the studwork but because we have framed out for a cupboard they were concerned this would be difficult to do. 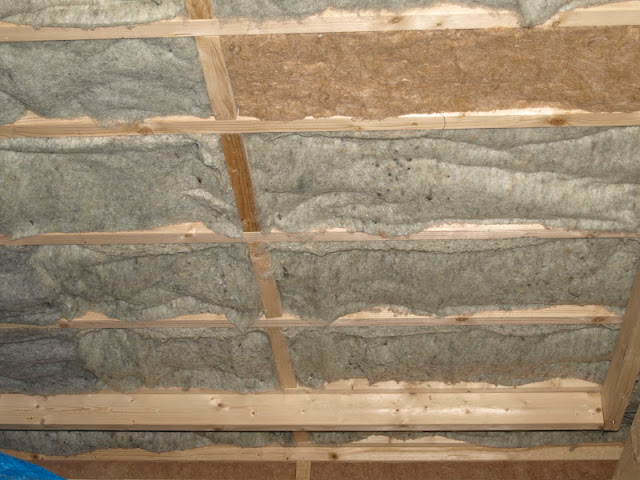 We had some sheeps wool left over so put this in instead.
Posted by Rachel and Andrew 0 comments 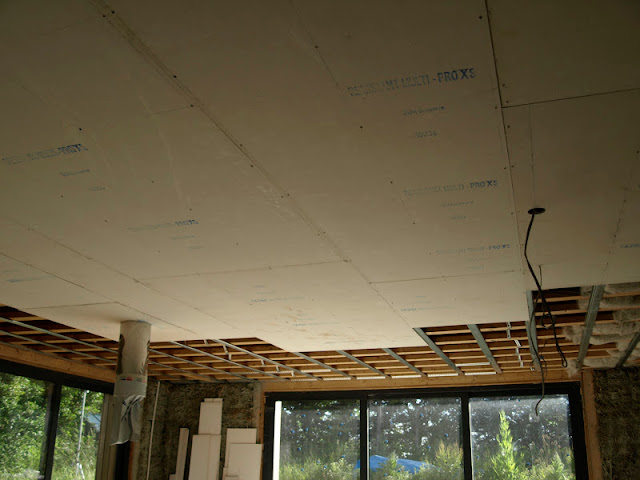 Back to boarding the GF ceiling - sort of approaching the end! 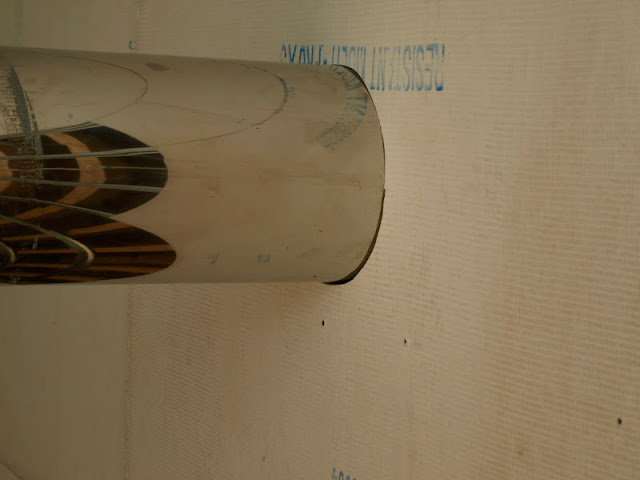 With the added challenge of boarding round the chimney!  (The board is Magnesium Silicate board which is A1  non-combustible and suitable for use as a fire board).
Posted by Rachel and Andrew 0 comments 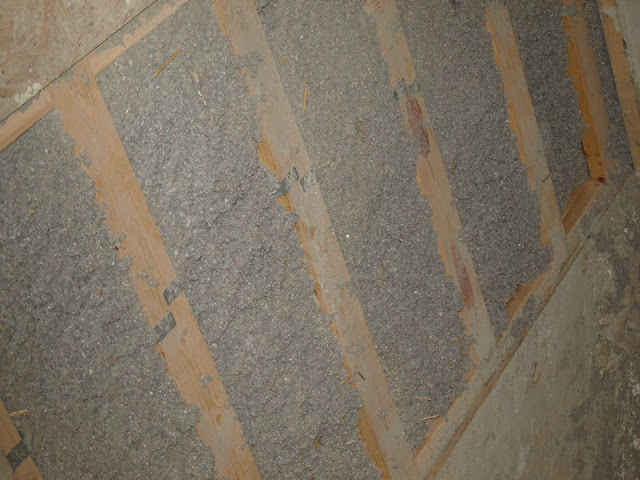 Part of the first floor over the utility room (with the heat pump) we wanted to fully fill with insulation to give as much soundproofing as possible.  The plan was to 'inject' them with warmcel insulation from below (just to be confusing the photo is taken from above!).  When we fitted the ceiling boards on the GF ceiling we let off a strip 400mm wide roughly in the centre of the floor, through which a pipe could be inserted into the floor and the insulation blown in.  We were told to tape up all gaps, even those only 10mm wide, so I assumed the insulation could be blown with some force.  I am not sure this was a correct assumption!  The pipe can not really spray any distance and needs to be able to get right to the ends of the joists, which gets increasingly difficult the further you get from the insertion hole.  The pipe is flexible and so negotiating it around things like the floor struts is not easy when you get a couple of meters away from the hole!  To ensure you reach the end of each joist I think you need to be quite methodical and measure how far in the hose has gone to ensure the insulation has gone right to the end.  We ended up taking up the ply on top of the joists to ensure the insulation had gone right to the end.  I had thought the beauty of this method of insulation was that you didn't need to take up all the first floor again but I am now not sure it is reliable enough just to trust all joists are fully insulated to the end without checking.

When it came to filling the last section of the floor, where the pipe had been inserted, either mesh can be put over the gap, a hole made in it and the last bit filled (similar to the wall insulation).  Or the last bit of ceiling board can be fitted, a small hole cut into it in every joist bay though which the last bit is filled. 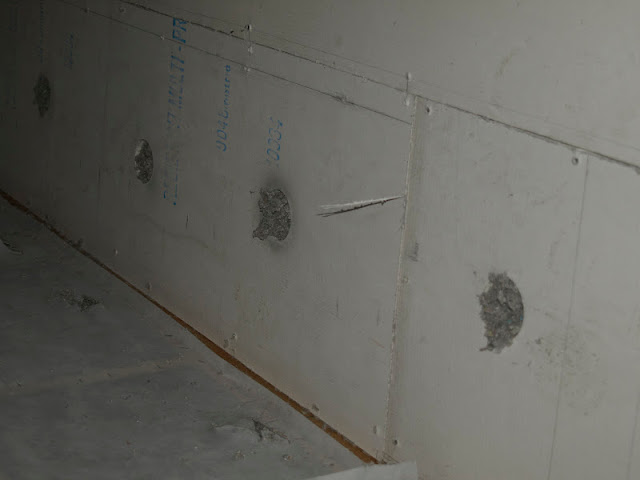 We went for the latter as using the mesh was more difficult as one side of the ceiling was hard up against a studwall and so there wasn't a lot to staple the mesh to. 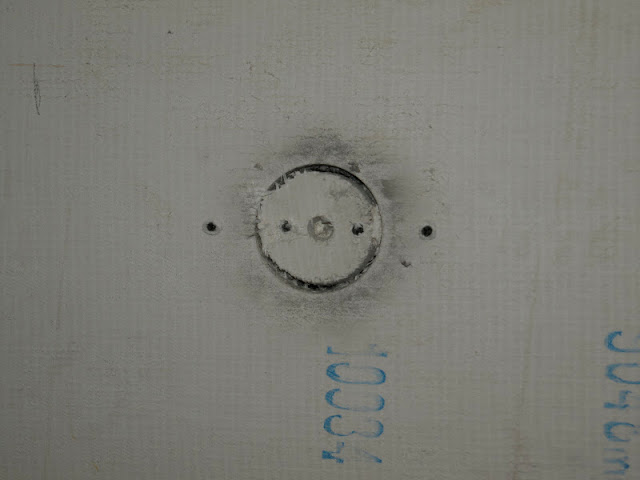 The cut out holes are kept.  A small batten is inserted into the hole and screwed to the ceiling board either side and the hole can then be fixed to the batten. 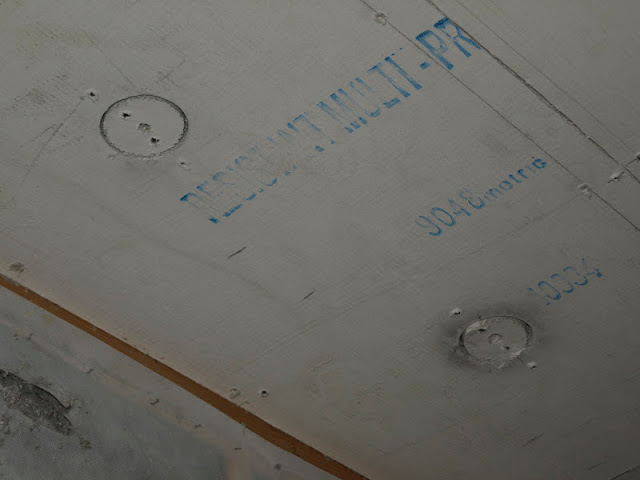 The holes re-fixed.
Posted by Rachel and Andrew 0 comments

Warmcel insulation - to mesh or not to mesh 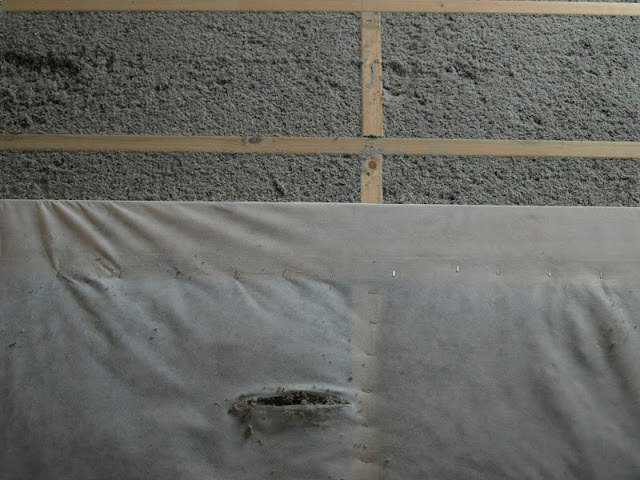 It was the first day of the putting in the Warmcel (recycled newspaper) insulation today into the internal timber studwork walls and also part of the first floor.  It was sprayed in using two different methods - open spraying (on the left of the image) and meshed (on the right), where they stapled up a fabric scrim first and then sprayed into the void created. 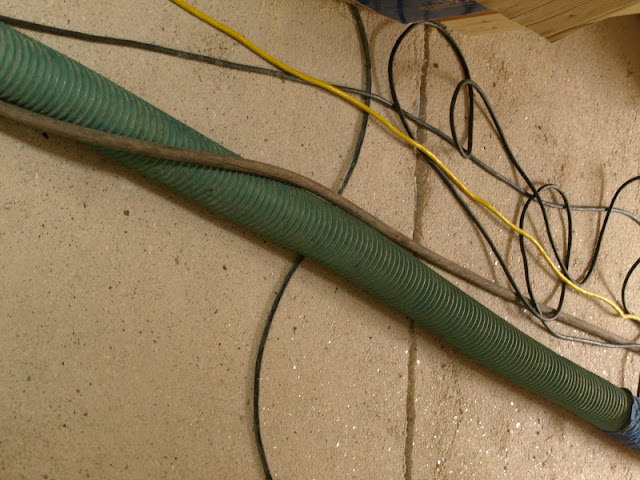 The insulation is sprayed using different size hoses - a smaller one where it is being injected into a contained void and a larger one when it is being open sprayed. 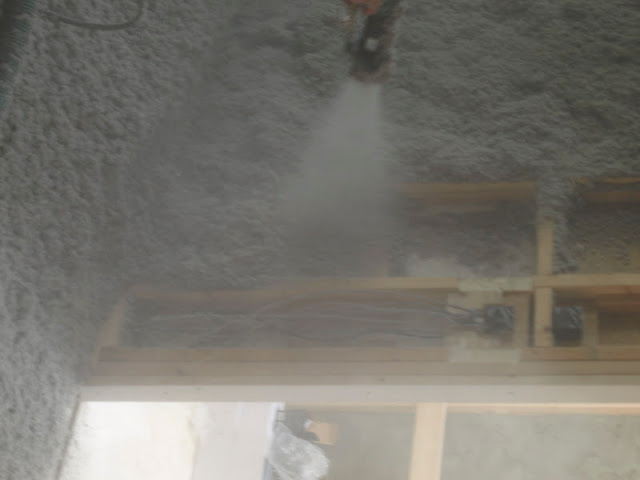 To start with the walls were open sprayed - this picture is a bit blurry as it was very hard to take a good picture because of all the dust... 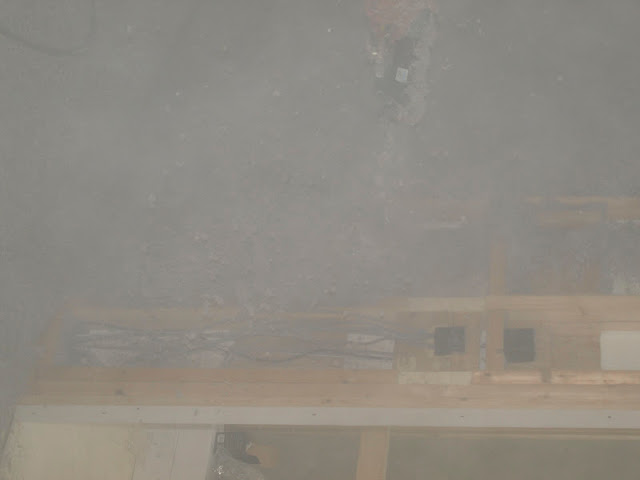 ...which just filled up the room!  Literally everything got covered in a film of newspaper dust.  (I am very glad that we taped over the electrical back boxes!) 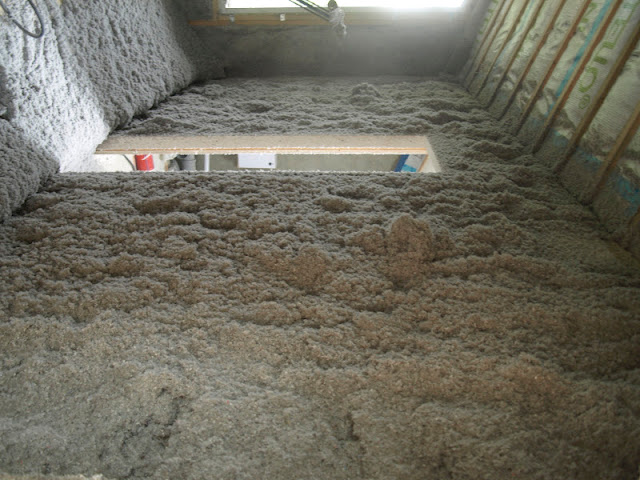 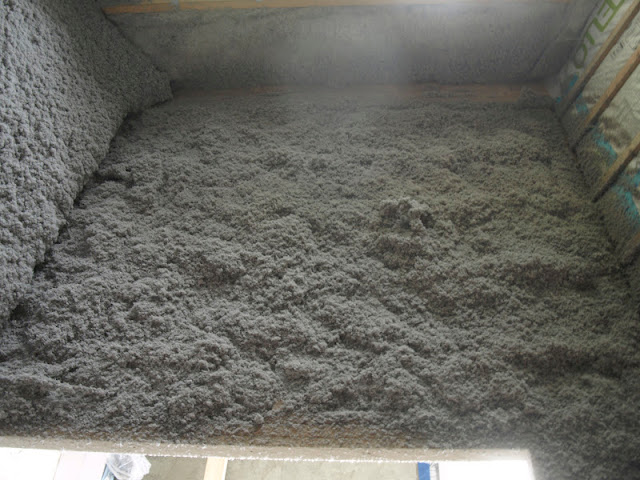 You can see the amount of insulation on the floor banked up against the wall. 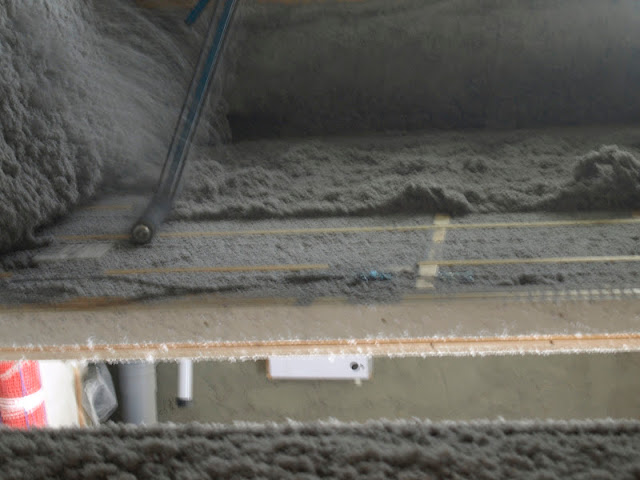 The insulation then gets flattened off and the overspray and dust tidied up - this takes nearly as long as applying it! 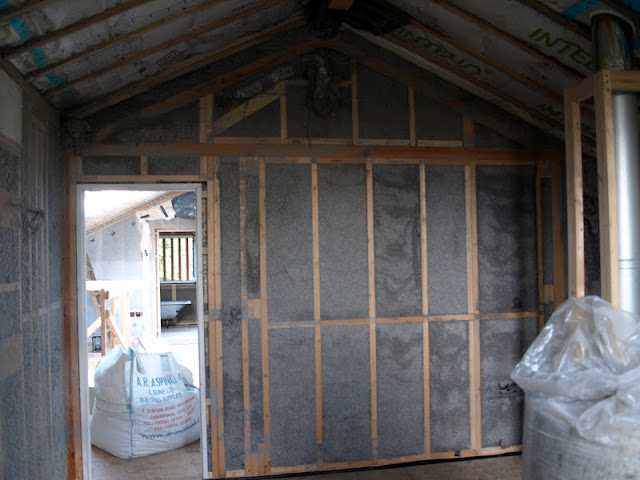 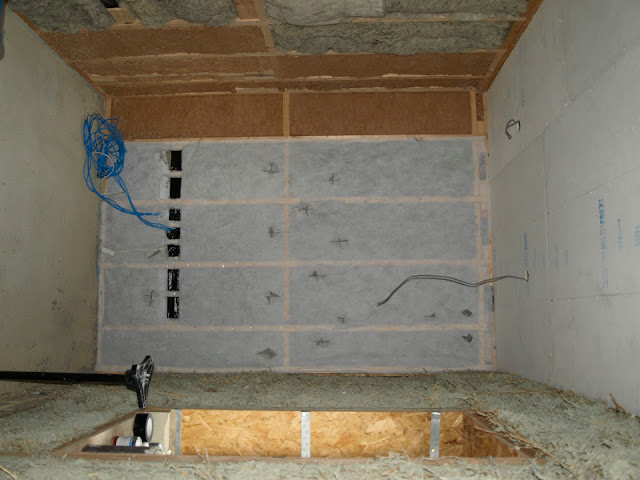 In contrast, the meshed walls have a fabric scrim stapled up first as seen here.  Holes are made in the mesh in each 'bay' of the wall, for example above and below every noggin and between all the studs.  The hose is then inserted into the hole and the void filled up.   There is virtually no mess!  A definite plus compared to the open spray method in my opinion! 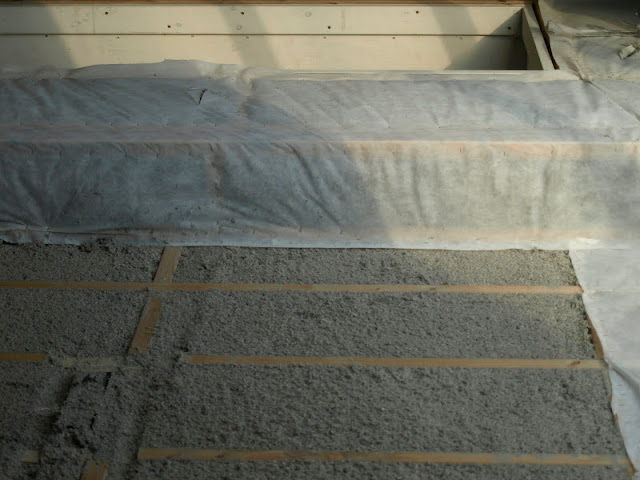 Its is worth noting that where we have the thicker walls, the people installing it found it easier to mesh and fill the entire void.  So in places the insulation is about 300mm thick.
Posted by Rachel and Andrew 1 comments 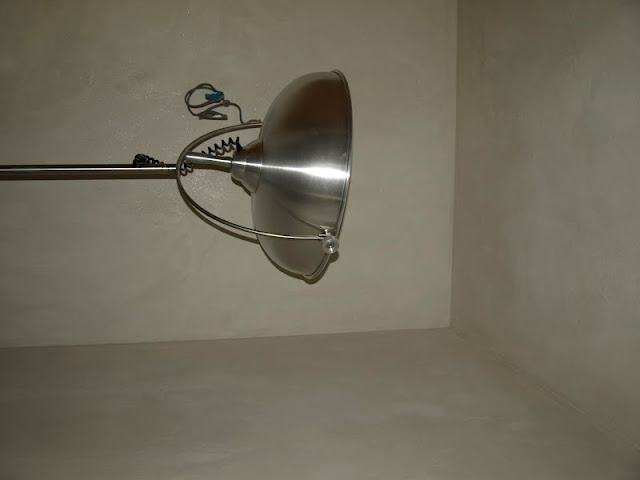 The plaster is pretty much dry in the downstairs WC now, and the colour has lightened up.
Posted by Rachel and Andrew 0 comments

Last preparations before the Warmcel insulation 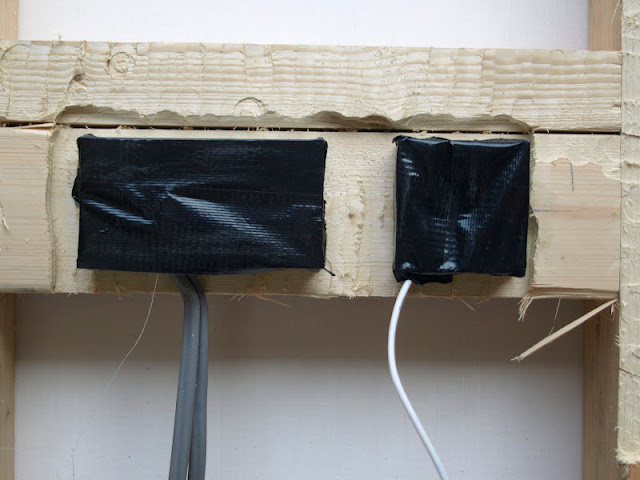 Taping all joints and over electrical back boxes to stop them getting filled with insulation. 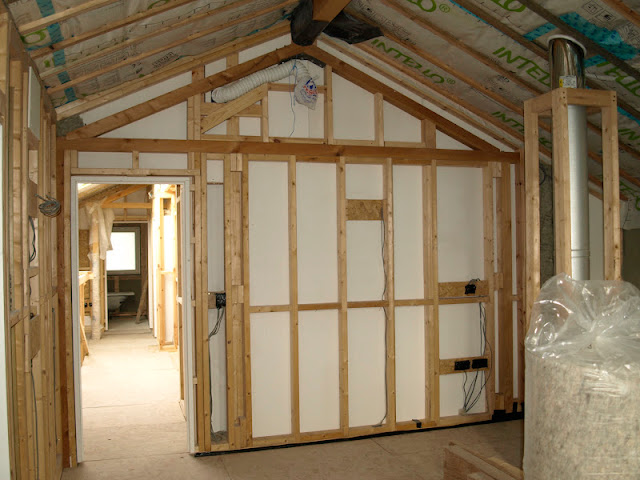 Walls ready to be insulated. 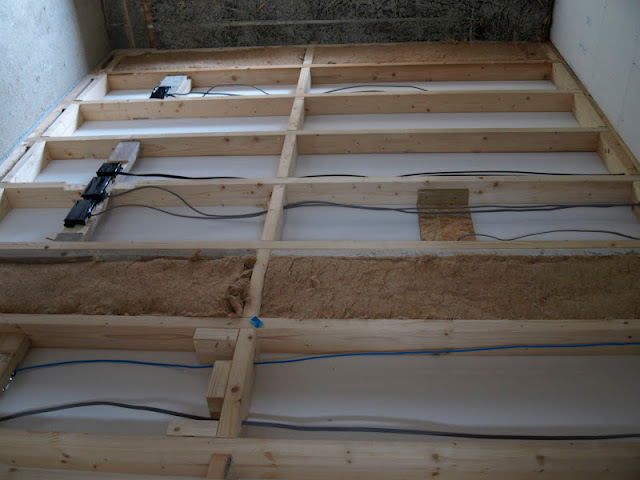 The study wall ready.
Posted by Rachel and Andrew 0 comments

Magnesium board and cupboard frame in utility room 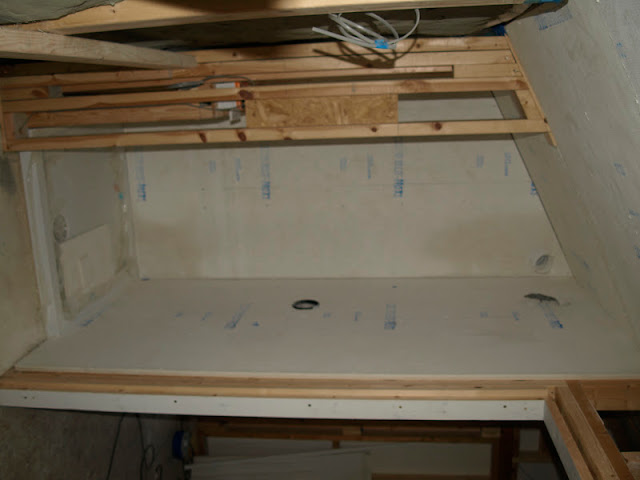 Magnesium board in the shower in the ensuite. 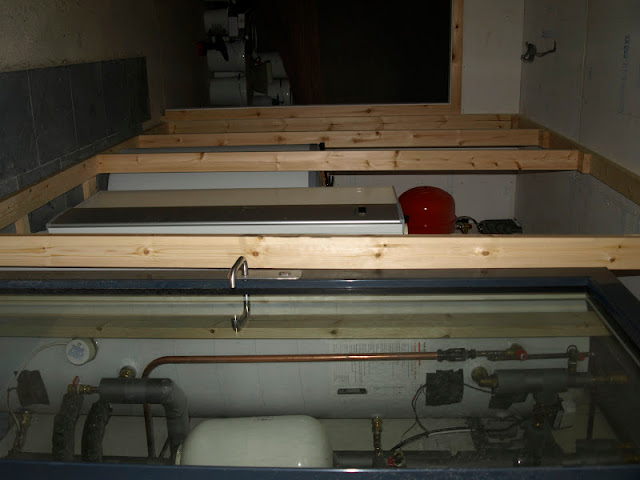 The frame for the cupboards around the mechanical equipment in the utility room.
Posted by Rachel and Andrew 0 comments 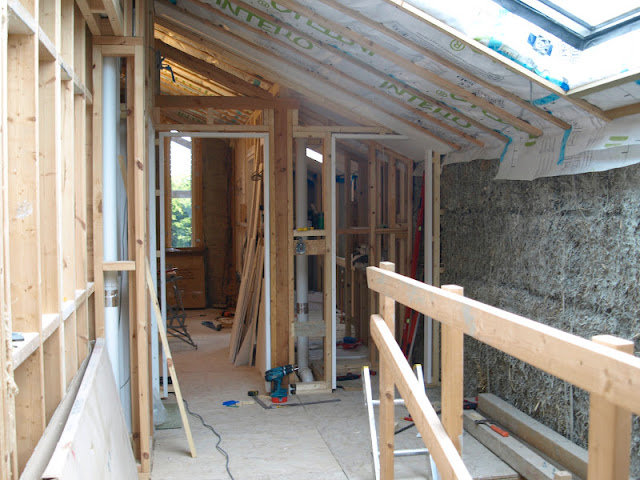 Door lining into the master bedroom and cupboard.
Posted by Rachel and Andrew 0 comments 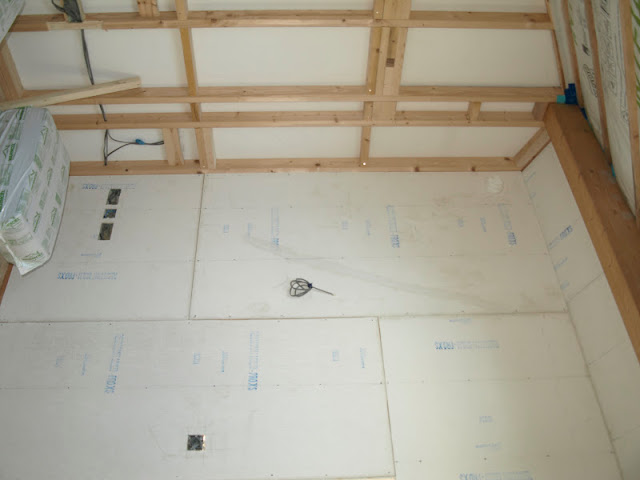 Magnesium board complete on the landing wall of Bedroom 3.
Posted by Rachel and Andrew 0 comments 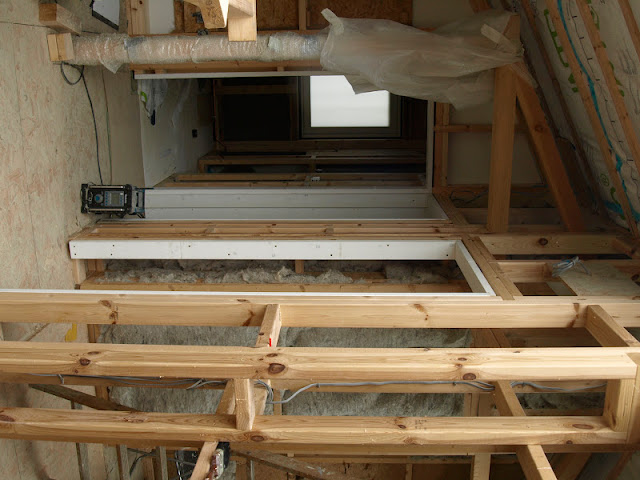