The rest of the resilient bars 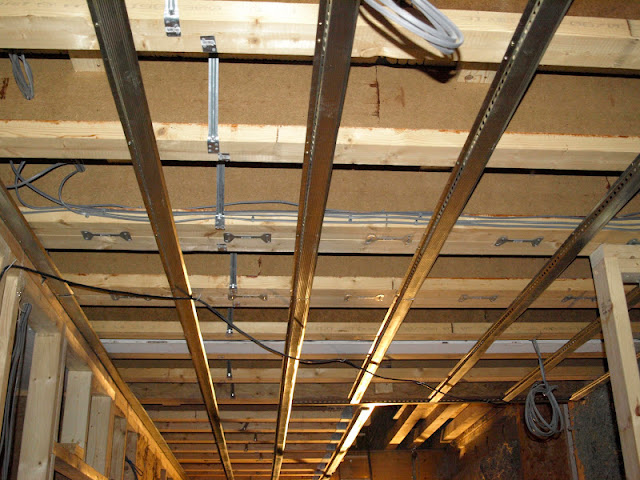 We though the hall was a good a place as any to start, the main runs were quick to put up.  We need to put resilient bar noggins where the ceiling boards will end.  We will come back and do this at the end.
Posted by Rachel and Andrew 0 comments

Followed by the ceiling board 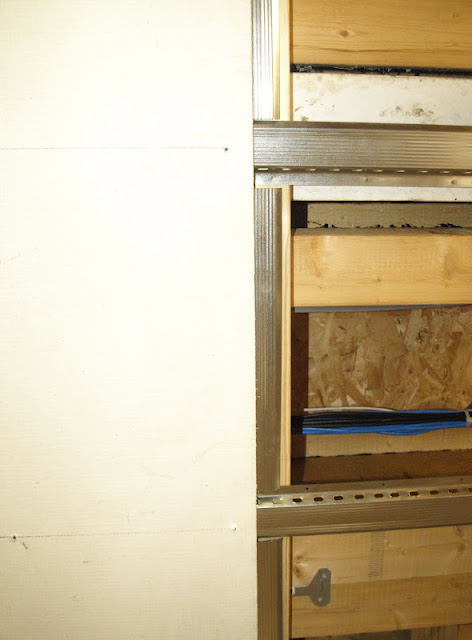 Followed by the ceiling board. 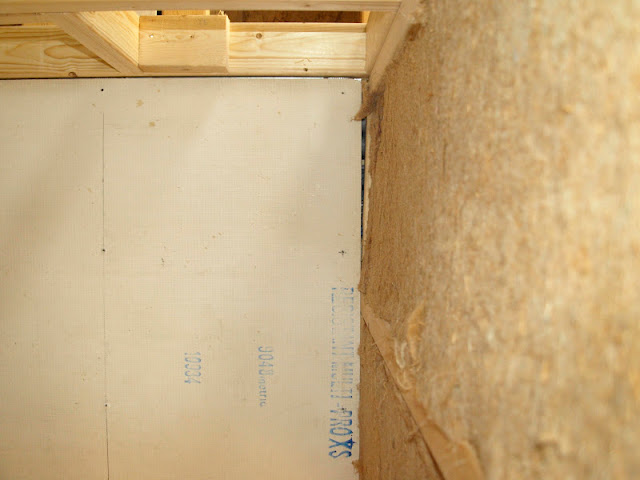 The first room to be done is the downstairs WC (it was the smallest room to try it out!).  It went well!  We now start putting up the resilient bars on the rest of the GF ceiling. 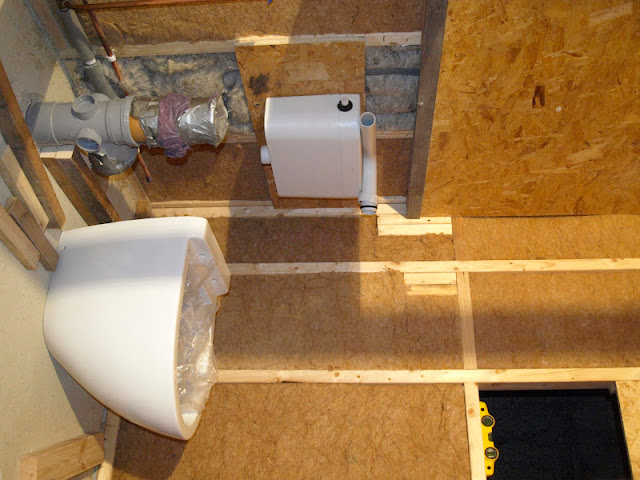 We also put up the concealed cistern while we were working in the WC and the plywood above, which we will fix the mirror to.
Posted by Rachel and Andrew 0 comments

Starting to put up the resilient bars 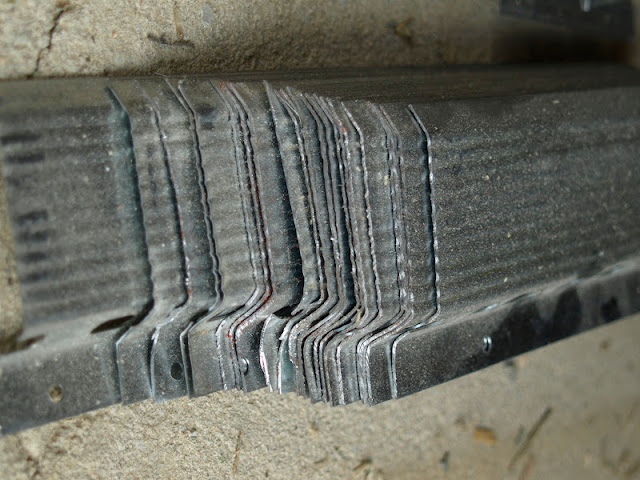 We are installing resilient bars on the ground floor ceiling.  These will provide an acoustic break between the ground and first floor.  Essentially they will act as a spring and stop sound being transmitted through the floor.  We will combine this with some fibrous insulation within the floor joists. 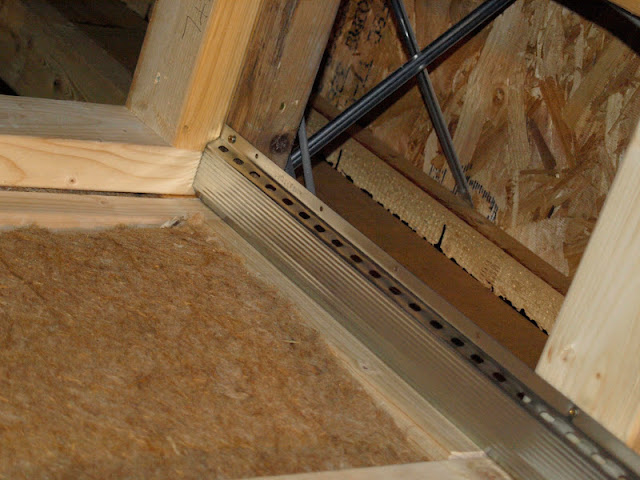 The first bar being installed!
Posted by Rachel and Andrew 2 comments

Starting work in the plant room 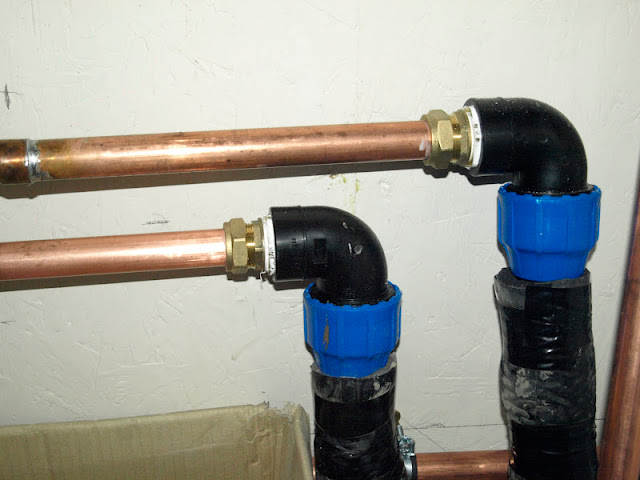 Starting the pipework from the 400m ground loop... 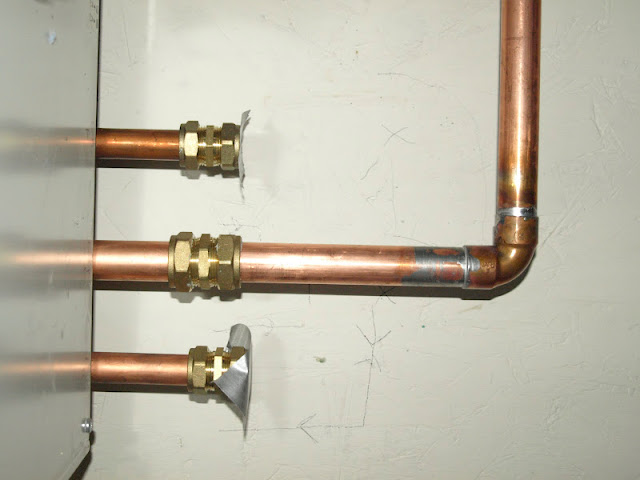 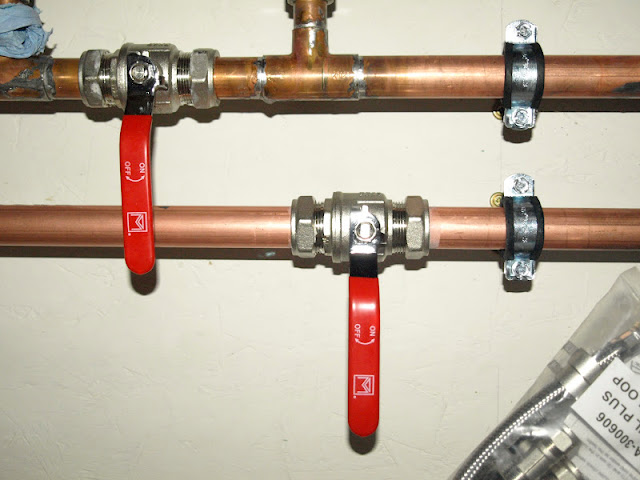 And linking everything together.  It all looks very complicated! 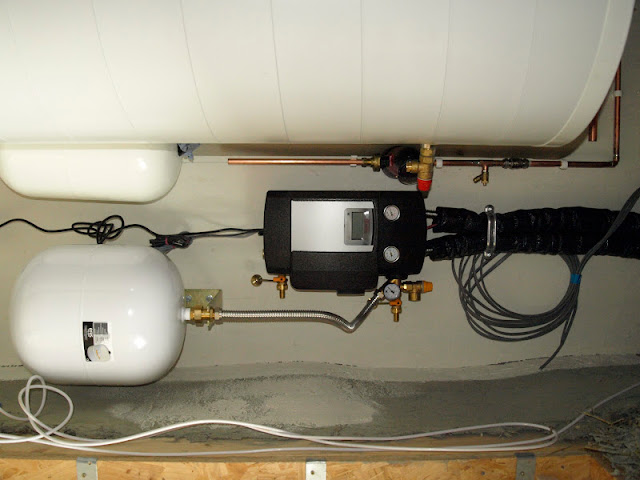 The solar thermal installation.  This should give us lots of free hot water!
Posted by Rachel and Andrew 0 comments 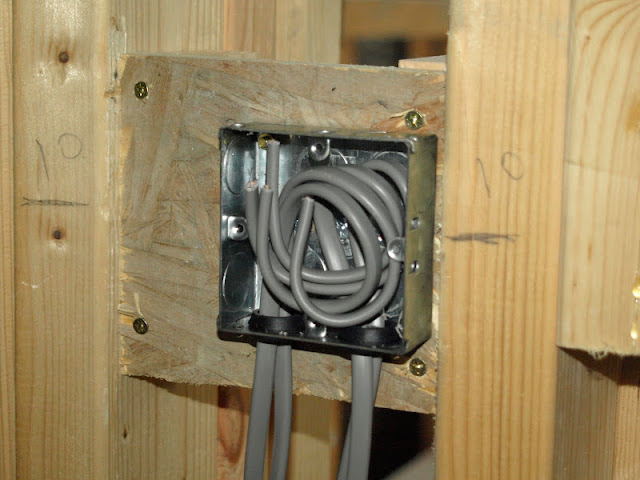 The back boxes and cables are fitted, which means we will soon be able to cover in the walls and get some plaster up!
Posted by Rachel and Andrew 0 comments 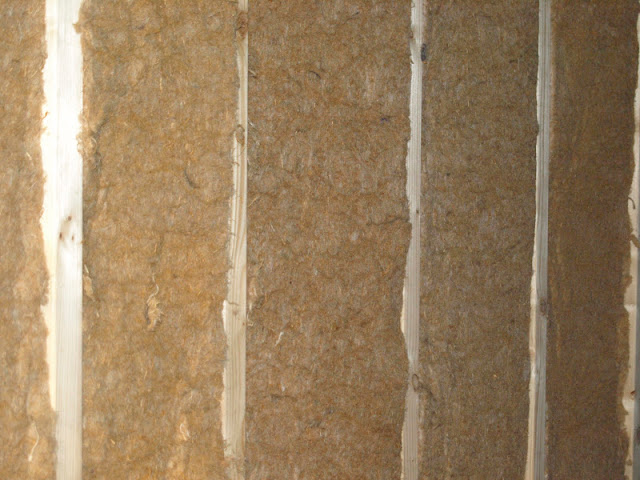 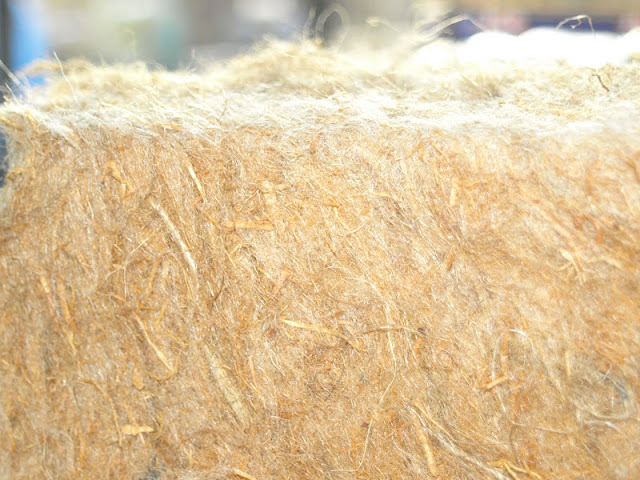 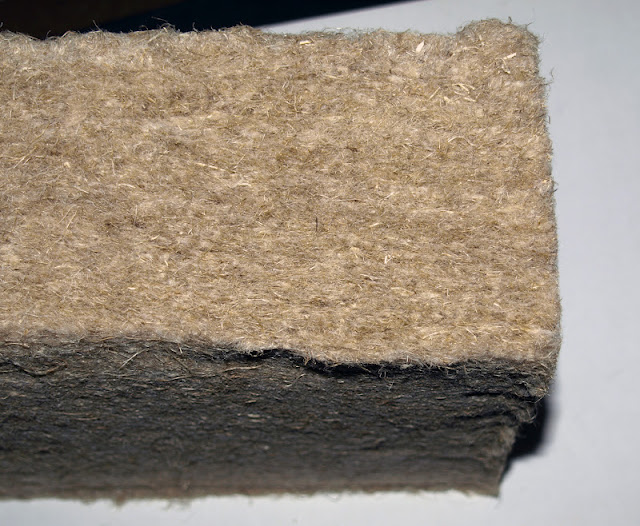 The other is warmcel, recycled newspaper which is blown in once the plaster board or what ever plaster substrate is being used, is fitted to one side of the wall.  Open blown has a density of about 30-35kg/m3.  The advantage of blowing the warmcel is that where we have cables and pipes concealed within the wall the warmcel will surround them.  If we were to use an insulation batt like the hemp and wood fibre then we would need to cut the insulation around the cables which would be tricky in places.
Posted by Rachel and Andrew 0 comments

Sockets in the straw walls 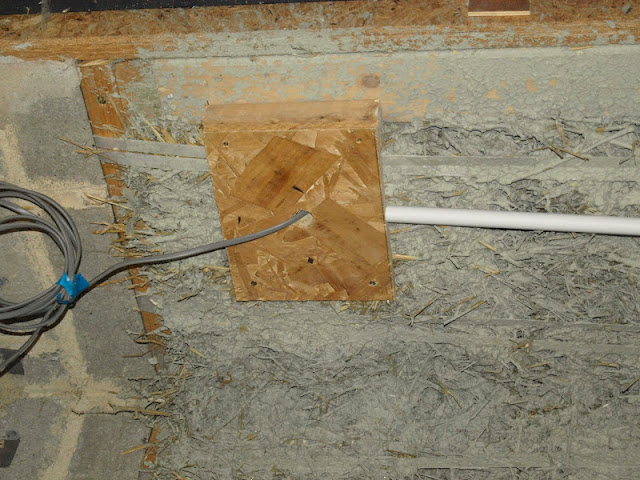 Where possible we have tried to keep the sockets and switches off the straw walls as these are easier to install in the internal studwork walls.  Some are unavoidable however, and we have run the cable down the straw wall in a conduit which will be covered with hessian / jute and plastered into the wall.  The ply patch to fix the back box onto has been secured in the wall using hazel stakes (as we did with the concealed cistern in the ensuite).
Posted by Rachel and Andrew 0 comments 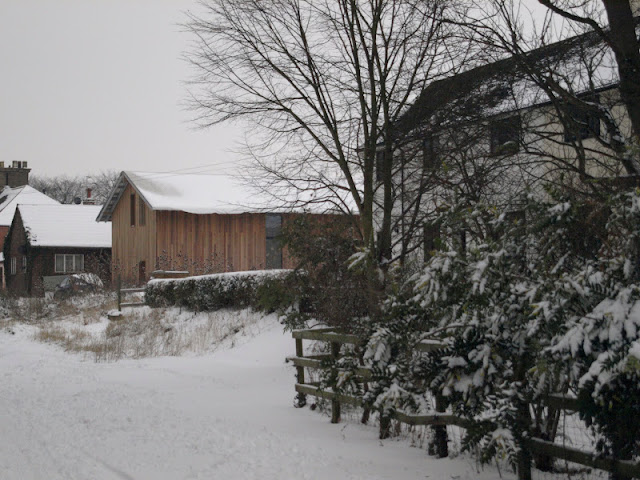 Straw house with the bungalow behind - this will be demolished once the new house is complete.

Posted by Rachel and Andrew 0 comments

Sealing around the chimney 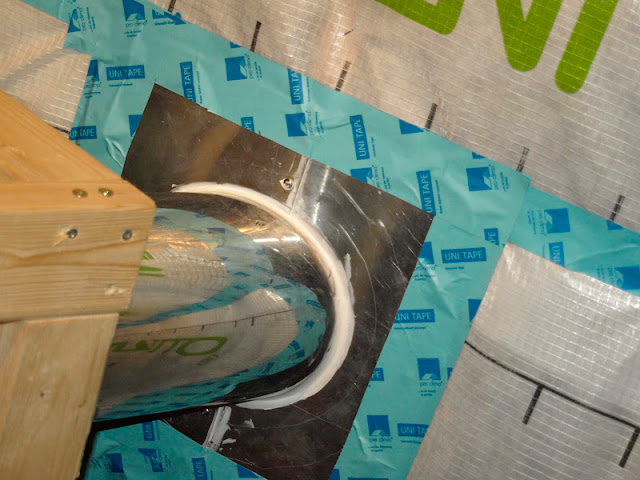 Where the chimney passes through the roof, all combustible materials needs to be kept a minimum of 50mm away.  To create an airtight seal non combustible insulation was put around the chimney above the air barrier, then we scribed the shape of the chimney out of aluminium.  We sealed this to the airbarrier with airtightness tape.  We sealed between the aluminium and the chimney with intumescent mastic.

The twin walled chimney we are using is classified as being allowed to be fully insulated when passing through the floor/roof zone.  Some chimneys need to maintain a free airflow around them all the way along them including when passing through floor/roof, so we would not have been able to have insulated above it if this had been the case.  When we enclose the lower part of the chimney within the wardrobe space, we will need to ensure that we allow sufficient vents to allow air flow around the rest of the chimney to dissipate any heat.
Posted by Rachel and Andrew 0 comments 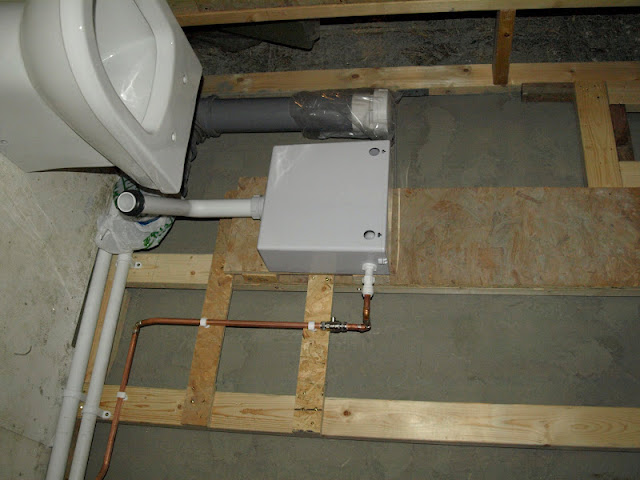 Most of the pipework is now in for the hot and cold water supplies to the bathrooms, kitchen and utility room.  Only a few odds and ends to finish off before we can cover in the walls, floors and ceilings ready to plaster.
Posted by Rachel and Andrew 0 comments